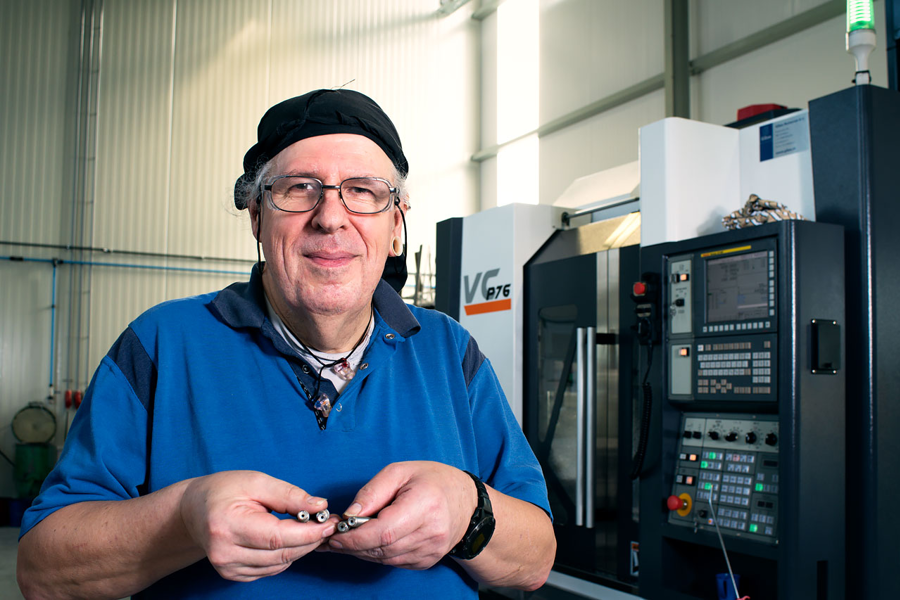 Ever since he was a child, Michel wanted to work with machines.

Michel started his career working with machines at DAF, and then went on to work as a turner. Six years ago, he joined the Jeveka team. Michel is a real craftsman: he loves working with his hands and he loves the smell of oil.

When Michel started working here, we were still based in Southeast Amsterdam. Michel: “At the time, the Production department was still relatively small: we only had a few milling machines and 3 CNC machines. Now in Almere, we have machinery to be proud of.”

Michel spends a lot of time working with the latest addition to Production’s pool of machinery: the Victor II. Michel: “The Victor II is much better and faster than the Victor I we already had. The great thing about this machine is that it can be used for multiple processes. For example, it can drill, but also mill. Actually, it can also do a whole lot more. But at the moment, we only use it for these processes, because they are our core tasks. But nothing is impossible with our machinery.”

The most extraordinary product Michel has ever made is a screw that underwent three processes. As Michel recounts the story his eyes sparkle with pride. “First, a bevel was milled into it, then it was rejuvenated and then a groove was milled into it. At the time, we didn’t even offer that last process, but I was asked to see what we could do. The necessary tools were then ordered, and we’ve offered that process ever since.”

“The biggest thing I’ve ever made here at the Production department is a demo plate that was used for KATO inserts. I drilled lots of holes in the aluminium plate so that they could demonstrate how the inserts work. When it was finished, people even asked, ‘Which CNC machine did you use to make this?’”

Curious? Want to find out what Jeveka can do for you? Visit hier